David King is a dancer, choreographer, durational installation artist and movement educator. Since 1992 he has been a principle dancer and choreographic collaborator with Cid Pearlman/Performance Projects (San Francisco/Los Angeles/Santa Cruz/Estonia). Their work has been presented by numerous venues including the Joyce SoHo (NYC), Theater Artaud (SF), and The Getty Center (LA). In addition to his work with CP/PP, he has performed with choreographers Eric Stern, Liam Clancy and Carmela Hermann, among others. In 1991 he earned a BA in Theater Arts/Dance from UC Santa Cruz and completed a four-year Feldenkrais practitioner training. In 2001 he received an MA in Dance from UCLA. King is co-founder of max10 Performance Laboratory, a monthly performance salon at the Electric Lodge in Venice, CA.

David King’s modern/post modern dance class focuses on expanding the moving potential of the body and fostering the articulate expressivity of the dancer. His class explores how to dance intelligently, how strength at the core allows for articulateness in the joints, and how to find joy and ease in movement. His teaching is influenced by Mel Wong’s interpretation of Cunningham Technique, Contact Improvisation, Release Technique, Aikido, and the Feldenkrais Method. 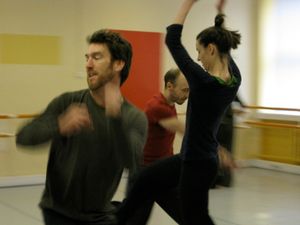